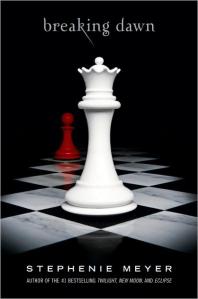 As all die-hard “Twilight” fans know, screenwriter Melissa Rosenberg is still hard at work on finalizing the scripts for the two-part “Breaking Dawn” finale, the first of which is scheduled to begin shooting in November. MTV News was lucky enough to catch up with the “Dexter” and “Twilight” screenwriter at San Diego Comic-Con, where she held court on a “Girls Gone Genre” panel. And while she still won’t reveal where the two films will break, she did give us a few details about the birthing scene and the “Book of Jacob,” as well as some dish on how she plans to handle all of the new characters Stephenie Meyer introduces in “Dawn.”

“It’s extremely challenging to introduce those new characters because you already have quite a slew of characters to service,” Rosenberg admitted of Meyer’s final book. “The Cullen family is large, the wolf family is large, you have three leads … finding room for all of them is a challenge. For me, it is about pulling forward the ones that are essential and really making sure they have a presence.”

Naturally, Rosenberg didn’t say specifically which characters would or would not appear in the films, but simply that she hopes “all of them will be there in one shape or another.”

Fans interested in checking in more frequently with Rosenberg’s “Dawn” progress can check out her Facebook page, which Rosenberg told us she checks regularly to see what Twi-hards are saying and involve them in plotline discussions.

“I ask people to really weigh in with what are their favorite scenes in the books, what’s important to them,” Rosenberg said. “And there generally seems to be a consensus about one scene or another. It’s really helpful for me and I’ll interact with them sometimes.”

She added that the fan interaction has helped her to squash any out-of-control Internet-generated rumors about her “Dawn” scripts. “At one point, [the fans] were upset because they had gotten the impression that I was choosing not to put the birthing scene in the script, and I was able to go online and say, ‘I don’t know where that idea came from, but of course the birthing scene is going to be in.’ ” Another Net-generated rumor, according to Rosenberg, is that she won’t include the Book of Jacob in the final film. “I don’t know where that idea came from, but that is not true,” she confirmed. “We are going to see Jacob’s perspective equally, so don’t worry.”